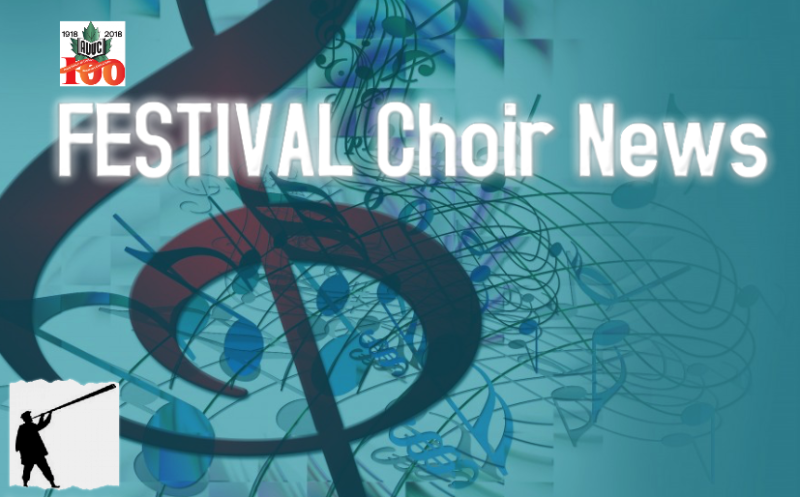 Throughout the history of the venerable Ukrainian Labour Temple, music from countless choirs (and orchestras) has resonated within its walls.

The joy of singing together with a love for the music and poetry of Ukraine is the tie that binds the 15 members of today’s Festival Choir. We sing in four-part harmony from a repertoire of Ukrainian folksongs and compositions and non-Ukrainian melodies as well. We perform at concerts at the Ukrainian Labour Temple and, upon invitation, are happy to sing at other venues. 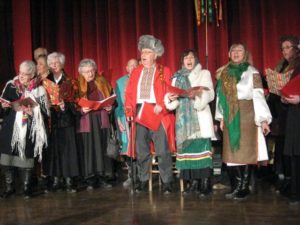 Our conductor and our accompanist is Anna Khomenko. She is highly skilled and has become a beloved member of the Festival Choir’s family.

The Festival Choir rehearses Friday afternoons from 1-3 pm at the Ukrainian Labour Temple, 591 Pritchard Avenue. Music is provided with lyrics in Ukrainian or in English phonetics. To join the choir, or invite us to sing, or drop in to a rehearsal, call Jeanne at 204-783-7914.

Anna Khomenko was born in Nezhin, Ukraine, and grew up in Russia. She started piano at the music school at age 7 then studied at the Music College in Yaroslavle. After graduating from the Music Institute in Moscow, Anna taught piano and directed the music school in Donetsk Region. She taught piano in Israel, before moving to Canada. Anna is a teacher at the Tauber Music School and at the Russian School “Erudit”. She has been the accompanist for the Ukrainian Festival Choir of the AUUC since 2013, and also accompanies the Seniors Choir of the Jewish Child and Family Services.

Choirs have been singing at Winnipeg’s Ukrainian Labour Temple for most of that historic building’s life. Mixed choirs and youth choirs, men’s and women’s choirs, children’s and seniors’ choirs, have filled the stage and their sound has filled the Hall.

Since 2005, the Festival Choir of the AUUC has been carrying on this choral tradition. Its twenty members, “rich in years” and folk singing experience, make an impressive sound. “They may look old, but they sound so young,” says conductor Vasilina Streltsov. 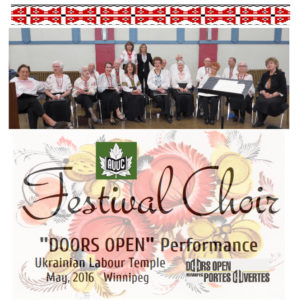 After singing at Winnipeg’s annual “Doors Open” in May (when visitors tour the city’s historic buildings), a “troika” of singers — Walter Mirosh, Nancy Kardash and Victor Krenz — took the choir’s recorded performance to a sound studio, where the engineer deemed the raw material CD-worthy. With additional selections from past performances and input from the production “troika”, the Festival Choir’s CD was born. “We hadn’t planned to record our performance with any kind of high-end equipment,” said project instigator Walter Mirosh, “but we had sung well, and when I heard how good we sounded on my recorder, I knew we had to make something to give to our choir members and supporters to remember us by.”

At first talk of a CD, the family of Constantine “Kosty” Kostaniuk, who died at 99 in 2015, asked to commemorate their father by covering not only the cost of the CD’s production, but also the celebration of its launch. Kosty was a consummate musician, beloved choir member and life-long AUUC activist. His daughter, Carmen Ostermann, speaking for sister Sonia and brother Tim, said, “Because of Dad’s love and participation in the choir, we felt we would like to make a small contribution financially so that all the choir could receive this gift. Thank you for keeping our Ukrainian heritage alive.”

The CD was launched in grand style on Sunday, September 25. Choir members, family and friends enjoyed a relaxing afternoon of visiting, delectable refreshments and of course, music. Conductor Streltsov led everyone in a typical vocal warm-up then in the singing of “Last Night I Had the Strangest Dream.” The Festival Choir performed a song from their CD, before being presented with their copies.

As guests mingled, picked up copies of the CD and took their time leaving, one was heard to say, “This was a good thing to do. A good way to spend an afternoon together.”

The Festival Choir of the AUUC holds THE JOY OF SINGING

On March 26, 2017 at the Ukrainian Labour Temple in Winnipeg, a Trembita  came to life in the balcony of the Hall to call over 60 people together to participate in the joy of singing. 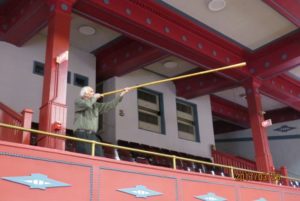 The afternoon started with a professional voice warm-up by choir director Lina Streltsov accompanied by Anna Khomenko on the piano.

The audience and the choir members had the music sheets and transliteration on their chairs so even if they couldn’t read Ukrainian or Russian they could sing, hum or just follow the music. 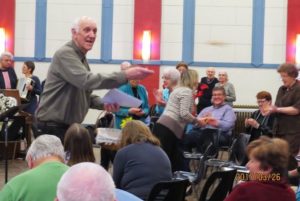 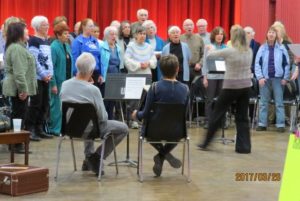 Other musical accompaniment was provided by Annis Kozub on violin, accordionist Nancy Grodzik, and Brent Stearns on guitar.

The repertoire started with “Katusha” a Russian folk song, followed by a Ukrainian folk song “Misyats Na Nebi”(Moon In the Sky). Each song was rehearsed two or three times with half the group singing the alto and baritone parts and the other half singing soprano and tenor parts.

During the refreshment break provided by the choir there was a lot of reminiscing among old and new friends. 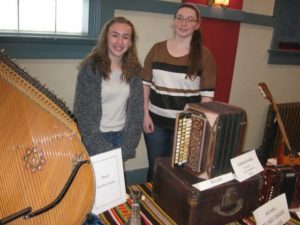 As people were preparing to go home they were thrown Horachi Bublitschki as a bonus for a job well done.

Everyone left for home feeling GREAT !